4th May 1627  George Strode of London and William Strode of Barrington, issued a deed granting to Thomas Strode and eleven other heirs, “all that the site and soil of the court of the manor of Shepton Mallet, lately converted into five almshouses, a chapel, a school-house and a dwelling-house for a schoolmaster, together with the houses of office thereunto belonging; and also the rectory and parsonage of Meare; and the advowson and free patronage of the vicarage of Meare“. The rents and profits from these properties were to be used as directed by George and William Strode from time to time.

1st May 1639 Rules of Management were laid out, appointing the Bishop of Bath and Wells as Visitor; there were to be twelve trustees to oversee the Almshouses, School and related properties.

The arms of the Strode family

25th December 1657  George and William Strode issued regulations for the working of their charity. This was set forth in thirty three distinct clauses minutely regulating the management and application of the charity. Included were instructions concerning the care of “five poor widows, such as have been born in the town, or lived therein for the space of twenty years at least“; that the poor widows should receive 16 pence (about 7p) a week every Friday and a sack of Mendip coal every month. There were further regulations concerning the appointment of a schoolmaster and the education of “twelve poor scholars“.

16th July 1696 Edward Strode and his daughter Elizabeth gave new instructions concerning the neglect of the properties following the deaths of the original trustees. Unfortunately, due to mismanagement of this Trust it fell into decline over the next century and was eventually reconstituted to benefit almspeople as the trustees saw fit.

23rd January 1699  Edward Strode of Downside created a trust consisting of four houses, under one roof, for the use of “four honest poor men, of the age of 60 years or upwards who have lived in Shepton Mallet at least twenty years“, and an annuity to pay for the repair of the houses and the maintenance and clothing of the poor men who were to receive one shilling and sixpence (7 1/2p) a week each. Edward Strode, by his will, ordered that £8 a year be set aside to buy bread to be given to twenty poor people of the parish at the church every Sunday.

20th March 1712  Elizabeth Strode, in her will, gave more money to augment the allowance of the four poor men. She also left more money to pay for the further distribution of bread to the poor. 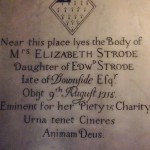 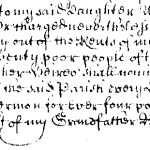 Left, a plaque for Elizabeth Strode in the parish church
Right, a fragment of Edward Strode’s will setting up the bread charity

1st July 1736 John Wynne, Bishop of Bath and Wells confirmed the Strode Gift and stated that the Almshouses were for “five poor widows, such as were born in Shepton Mallet or had lived therein for twenty years“. Prayers were to be said in the Chapel; also that the school should teach twelve poor scholars in return for £12 per year. The widows, every two years on the Feast of Ascension, were to receive, “a new gown of blue broad cloth costing twenty shillings and upon the sleeve embroidered S.G.W (for George and William Strode). Should the wearer die the gown to be left to their successor.”

6th October 1864  Mrs Mary Anne Wickham, widow of the Rev. William Trelawny Wickham M.A. formerly rector of Shepton Mallet, gave in her will a sum of money to build four almshouses on ground which she had purchased for that purpose in her lifetime. The almshouses were for four poor widows appointed from time to time by the trustees of Strode’s School and Almshouses Charities founded by George and William Strode. Each widow was to receive 3 shillings and 6 pence (17 1/2p) per week from Strode’s school charity and a further sum given by Mrs Wickham.

1871 Charles King, an America citizen born in Syracuse, USA set up a charity to assist, annually, three poor people between the ages of 15 and 30 to emigrate to the USA or Canada plus a grant of five shillings (25p) to any poor person on 1st January each year. This charity was taken over by United Charities in February 1950.

1872 Thomas St John Hudson provided charity for the Relief of the Poor. This was absorbed into United Charities in July 1957.

1890 Two small charities were set up at Cowl Street Chapel to help poor Protestant Dissenters. These were absorbed into United Charities in April 1961.