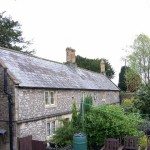 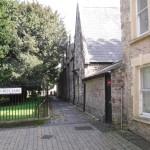 On 23rd January 1699, Edward Strode of Downside conveyed to his trustees “four houses lately erected under one roof” for the use of four poor old men of Shepton Mallet; also a £24 annuity to be employed in the clothing and maintenance of the four men and for the repair of the houses.

The objects of this charity were “honest poor men, of the age of 60 years or upwards, who have lived in the parish of Shepton Mallet at least twenty years, and have not received any of the weekly alms of the parish“. They were to receive one shilling and sixpence each weekly, were to have a new grey hat, one plain neck-cloth, and a dowlas shirt, a loose bodied coat, with the letters E.S. in blue cloth sewed on each sleeve, and breeches of red cloth, a large waistcoat of white cloth, a pair of blue yarn stockings, and a strong pair of leather shoes once every two years at Easter.

A further four ‘1 up 1 down’ almshouses were added by the Strode Charity in 1862, along with the single storey Bread House.

Edward Strode left £8 per year to be laid out in bread to be given to twenty poor people of the parish weekly at the church every Lord’s Day, after morning service.