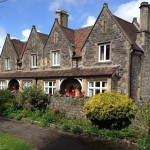 Mrs Mary Anne Wickham, widow of the Reverend William Provis Trelawny Wickham M.A. formerly rector of Shepton Mallet, gave and bequeathed by her will, proved 6th October 1864, a certain sum of money to trustees to be applied in building four almshouses on ground which she had purchased for that purpose in her lifetime. The almshouses, built in 1868,  are for four poor widows appointed from time to time by the Feoffees of Strode’s School and Almshouses Charities founded by George and William Strode. Each widow receives 3s 6d per week from Strode’s school charity and a further sum under Mrs Wickham’s will.