SHEPTON ALMSHOUSES CHARITY OF THE YEAR 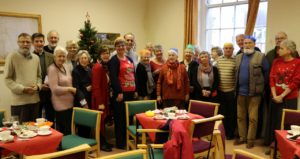 The Residents and Guests were served high tea by the Trustees and were welcomed by Chairman, Jeff Curtis. This year Shepton Mallet’s “Knit and Chat” group made the Almshouses their Charity of the Year and a cheque for £1250.00 was presented by Eileen and Kathy to Treasurer Graham Cockill towards the cost of the continued refurbishment of their ancient buildings. They were warmly thanked for this generous donation, the fruit of much hard work throughout the year. Mr. & Mrs Kennedy also gave a private donation. and, on behalf of Tesco, Debbie Towner invited the Residents to a Tea at Tesco’s the following week.

A very enjoyable afternoon was completed with a speech from the Rector, thanking the Chairman and Trustees for their dedication in maintaining and improving the Town’s Almshouses.

On behalf of Tesco, Debbie Towner invited the Residents to a Tea at Tesco’s Shepton store the following week.